There is, and has been for some time, a growing interest and awareness of hand-crafted beer styles in Sweden. We aim to showcase the diversity of beers available from around the world, prepared to suit the Swedish pallet, but in our own traditional English way.

We experiment with mainly organic products such as malted barley, hops, and yeast to create interesting and original beers. Our water is from the region of Sundsvall, known to have one of the highest quality waters in Europe. 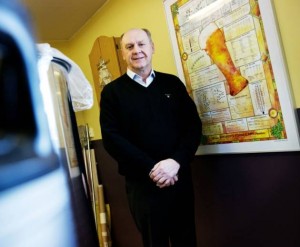 The man with responsibility of brewing Dykes Brewery’s beer is father-of-two Dick Dykes.

Dick has brewed beer on an amateur level for more than 30 years. It all started with simple equipment in the family’s garage in Sundsvall with a few batches of English Bitter and Pale Ale. Soon enough, neighbors from surrounding houses got word and flocked with the notion of a true Englishman making his own beer. Those who were there will remember the salt & vinegar chips, the dart board hanging on the wall, and of course the musky scent of beer being tapped from the makeshift kegs.

Now, a fully qualified brewmaster since decades back, Dick has decided to take his passion and knowledge of all things beer and share it with fellow beer connoisseurs in the form of Dykes Brewery’s fine ales. Although he’s one of the most friendly and laid-back people you could wish to meet, his natural curiosity about beer styles and ingredients have led to a range of innovative and intriguing beers. Brewing a beer that not only quenches your thirst, but is suitable to drink in connection to food, is where his extensive experience as a brewer comes into full play. We hope you share his passion and enjoy his hand crafted beer, specifically made for the Swedish palette, but with a traditional English twist!